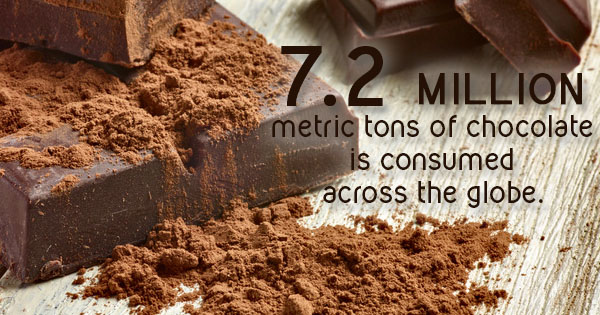 If you ever thought that chocolate and exercise don't go well together, new research suggests that you thought wrong. A new study from Kingston University in London reveals that dark chocolate can give athletes the upper hand when it comes to fitness training.

So what makes dark chocolate so performance enhancing? According to the study, the answer lays in body chemistry. Rich in nitrates, beet juice has long been considered one of the best all-natural performance boosters. And when nitrates are converted into nitric acid in the human body, the body's blood vessels swell, reducing the amount of oxygen the body uses up and furthermore enhancing its performance. Similar to beets, organic dark chocolate is rich in a substance called epicatechin, which is a nutrient found in the cacao bean that also increases nitric oxide production in the human body.

With this in mind, researchers at Kingston University put dark chocolate to the test to see if it yielded the same benefits as beet juice. And as it turns out, the participants who ate dark chocolate regularly during the trials used less oxygen during physical activity and covered more distance when cycling when compared to participants who snacked on white chocolate.

And chocolate has been shown to have other performance-enhancing qualities. Though the caffeine count is less than a cup of coffee, tea, or soda, dark chocolate contains small traces of caffeine that help boost performance during intense physical activity.

So if you're among the majority of people who are having trouble chugging beet juice in the middle of your workout, chocolate might be a great alternative. After all, of the 7.2 million metric tons of chocolate that is consumed across the globe, 20% of all chocolate consumption takes place in the United States, with many wholesale chocolate suppliers located within the country. Perhaps some of the top athletes in the world will start contacting wholesale chocolate suppliers to get their extra energy boost in bulk!