What I love the most about food is how often and how easily it brings people together, and I’m not talking about how fast everybody runs all the way to the table when breakfast or dinner are ready. No, I’m talking about how food allows people to get to know more about each other. If you still don’t understand what I mean, let me tell you 2 brief and personal stories.

It was January a few years back, the cold was intense and I was staying with my parents at my grandparents’ house in Spain. One morning, the cold went really intense so everybody was around the house fully covered and with their hands inside their dressing gowns’ pockets. All of them but my grandma, she does really enjoy cold weather. While laughing at us she said she was going to make a warm and delicious breakfast so that she helped us look less stupid. That morning she introduced me to what now, is my favorite breakfast ever, and even an occasionally snack.

The moment she placed a tray of cups on the table, I started suspecting she was serving some hot cocoa and it wasn’t necessarily the smell that helped me to know what she was serving. My nose was already dead because of the cold! Suddenly I remembered how much she loved Chocolate and anything related to it; I also remembered the big package of Santa Barbara Chocolate and cocoa that my dad gave her the day we arrived; and voilà I was right. After all, and since she found out that the chocolate from Santa Barbara was a completely organic chocolate, my grandma never loses a chance to eat some of that chocolate or drink some of that cocoa.

She came back from the kitchen and placed another tray on the table, but this time it was a tray of ‘churros’. I must admit I didn’t recognize those strange sticks of fried dough with powder sugar on it. However, when my grandpa looked at my grandma with those sparkling eyes and big smile, I knew that, for some reason, those churros were special. Once again, I was right. I know what you may think at this point: ‘hey, you’re really good at this Clairvoyance stuff’. Who knows? I might be. I couldn’t resist my curiosity so I asked them what was going on there. This is where the first story (mine) ends and the second story (my grandma’s) start: “Well, I’m telling you, I’m telling you; but don’t let those churros get cold…”

She told me that the churros were the reason she and my grandpa met and started to talk, although both of them were shy, both of them were from different countries and, at the same time, those countries were from different continents. Now I know my grandpa is from Mexico, and he used to work at a “churrería” (a place dedicated to make and sell churros). She continued by saying she was attracted to the Churrería because at those times she didn’t know, and didn’t expected that her favorite meal was eaten somewhere else besides Spain. She started to see a huge variety of churros she hadn’t seen by then and got quickly overwhelmed. That was the moment when my grandpa offered her a churros sample that had some chocolate inside, and with “the same look and smile he just gave me” he caught her heart forever. My grandma said she started to visit that place every time she went back to Mexico, and eventually they became ‘friends’ and later on, at some point that she says she can’t remember (I have the feeling she lied to me) they fell completely in love.

She also said that, until they were capable of overcoming their shyness, the few thing they used to talk about were related to churros, chocolate and other food or desserts; anyway, she now realizes that by talking about churros they had the opportunity of getting to know each other’s traditions, cooking style, and more.

I was already full of churros and cocoa by the time she finished this beautiful story. I don’t know yet if the reason I love churros now is because its flavor or because this story. Nonetheless, I think I’ve made my point. Food brings people together, and if you still don’t believe it, go out and discover all variations that exist of your favorite meals and desserts, and listen to the stories behind them. You might find a new story, just like my grandparents did through Mexican churros, or just as I recently did through Santa Barbara Chocolate.

Churros are a Latin delight. These fried long doughnuts are spiced with cinnamon and traditionally served with hot chocolate. 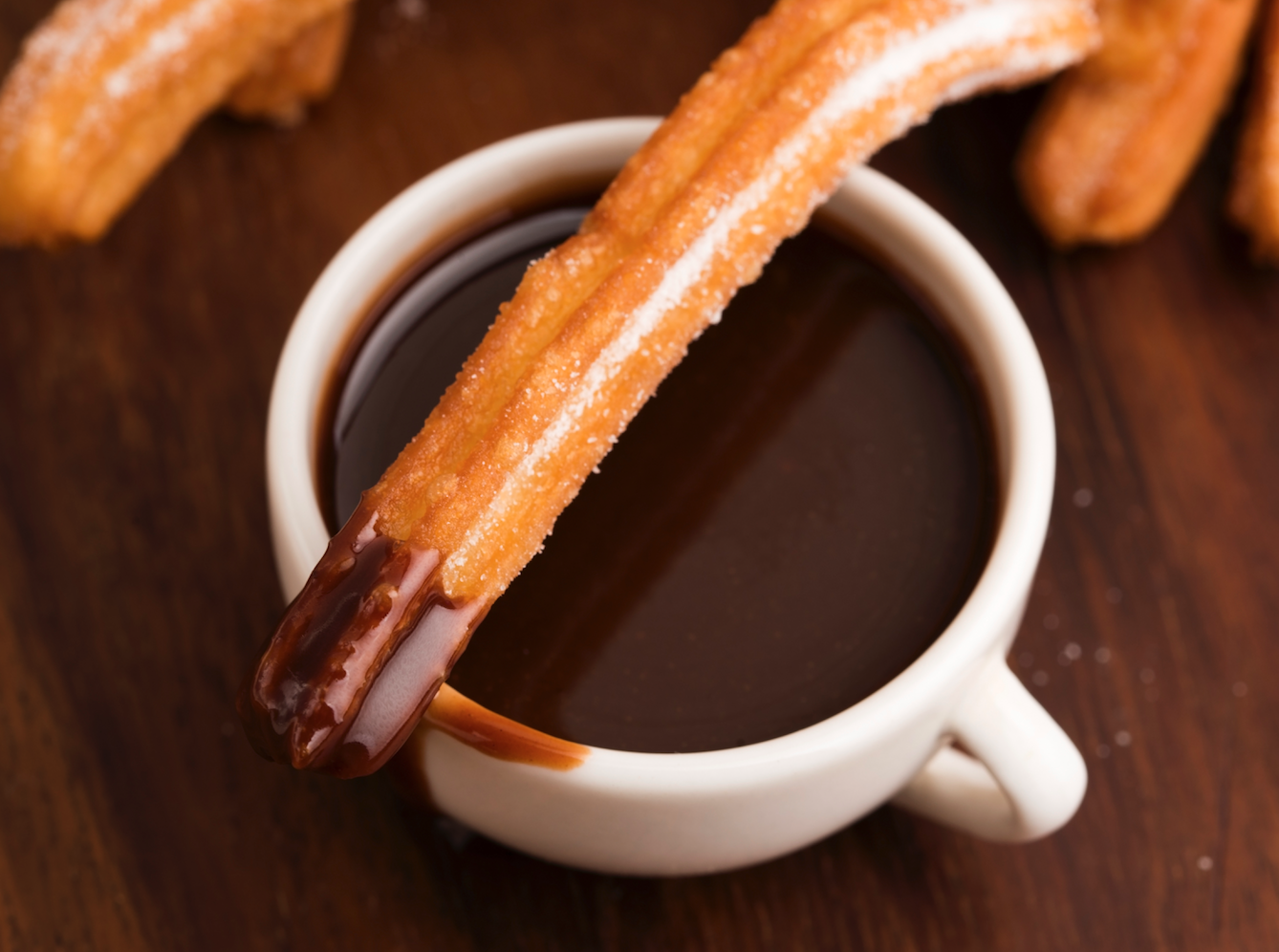