How Much Caffeine is in Chocolate? 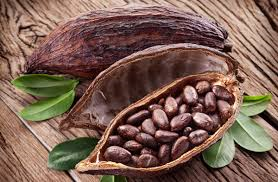 Eating chocolate is an exceptionally satisfying experience. We often tend to feel amazingly pleasant after this divine indulgence. Chocolate is the ultimate comfort food and a stress reliever. Chocolate has the ability to console us when life gets us down. It is a powerful mood enhancer and is much more than just being a cure for the broken heart. Research is continuing all the time and experts suggests that chocolate, preferably dark chocolate or chocolate with at least 70% cocoa solids, is really healthy for us. Cocoa beans from which this delicacy is derived are a host to more than 300 known chemicals which scientists have been working on to isolate. It’s amazing how a little bean can hoard so many healthy chemicals.

CHEMICAL COMPOSITION OF THE COCOA BEAN:

The chemical composition of a cocoa bean is very complex:

Caffeine is also present in lesser amounts in the skin that surrounds the cocoa beans. It usually constitutes 0.05% to 0.3 % of caffeine whereas dried tea leaves have approximately 3% caffeine and dry coffee beans have almost 1.2% caffeine present in them. The difference in tea versus coffee effect on you as a consumer is in the amount you use to brew your drink. You use much less dried tea leaves to brew a drink than coffee. This is why coffee generally has a bigger caffeine punch in daily life as compared to tea (you are using more coffee by weight in making your drink).

When chocolate is made, the skin is removed (winnowed) from the beans. These beans resulting from the process of winnowing are called the cocoa nibs.

It is in these cocoa nibs that the caffeine found in chocolate resides. The nibs are ground in making chocolate and the more concentration of ground nibs (darker chocolate), the more caffeine it will contain.

Another cousin of caffeine mainly found in cocoa nibs is Theobromine, previously known as xantheose. Both theobromine and caffeine share remarkable similarities in their composition structure and this probably explains why they both work in similar ways.

Both caffeine and theobromine are extremely useful as vasodilators, meaning they are beneficial in providing asthmatic improvement in breathing by widening the blood vessels in the lungs. However similar they may be, theobromine does not have the similar strong effects that caffeine does on people.

Chocolate is evolving, and this evolution is bringing forth numerous health benefit which were previously unknown. According to research carried out by The Telegraph, eating dark chocolate provides the following health benefits:

The following chart shows the products with high Theobromine amounts.

The table below depicts the amount of theobromine and caffeine present in different cocoa products:

Death by Chocolate for People

Death by Chocolate is generally my favorite menu item... chocolate cake, chocolate ganache, chocolate mousse, chocolate ice cream and chocolate fudge sauce. After that type of indulgence the meaning of the dessert name becomes self evident. But the reality of the situation is actually yes, it is possible. Well how much though and why?

If we exclude the actual impossibility of eating this much chocolate in one sitting it would be 22 lb. of dark chocolate for a 170 lb. individual. This translates to eating about 40 regular sized 3.5oz chocolate bars in a time period of about 30 minutes - not likely possible to complete (well unless you are really a true chocolate fiend). ;)

Theobromine is the natural plant alkaloid and nerve stimulant that is in chocolate and tea by the way. Anyhow, theobromine gives you that euphoric feeling and "pick me up" not to mention it has aphrodisiac properties.

So my recommendation is to enjoy your chocolate in moderation.