Made with whole milk sourced from small farms high in the Swiss mountains, this light chocolate is delicately balanced between sweet and milky. The Swiss invented milk chocolate and have perfected the recipe with unmistakable quality.

Rare cacao blended with fresh Alpine milk is what makes our Swiss Milk Chocolate so addictive. If you are a chocolatier, the exotic taste along with the wholesale bulk chocolate pricing will have your customers standing in line to savor your chocolate recipes.

Most Swiss alpine milk cow herds number only 20 cows. These healthy cows enjoy a diet of green mountain clover and fresh grass. As a result of a comfortable life these cows make some of the best tasting milk in the world. The cows graze freely at an elevation above 1,000 meters in the cleanest pastures, which is one of the  qualities of real Alpine milk, a milk renowned for top quality and flavor. 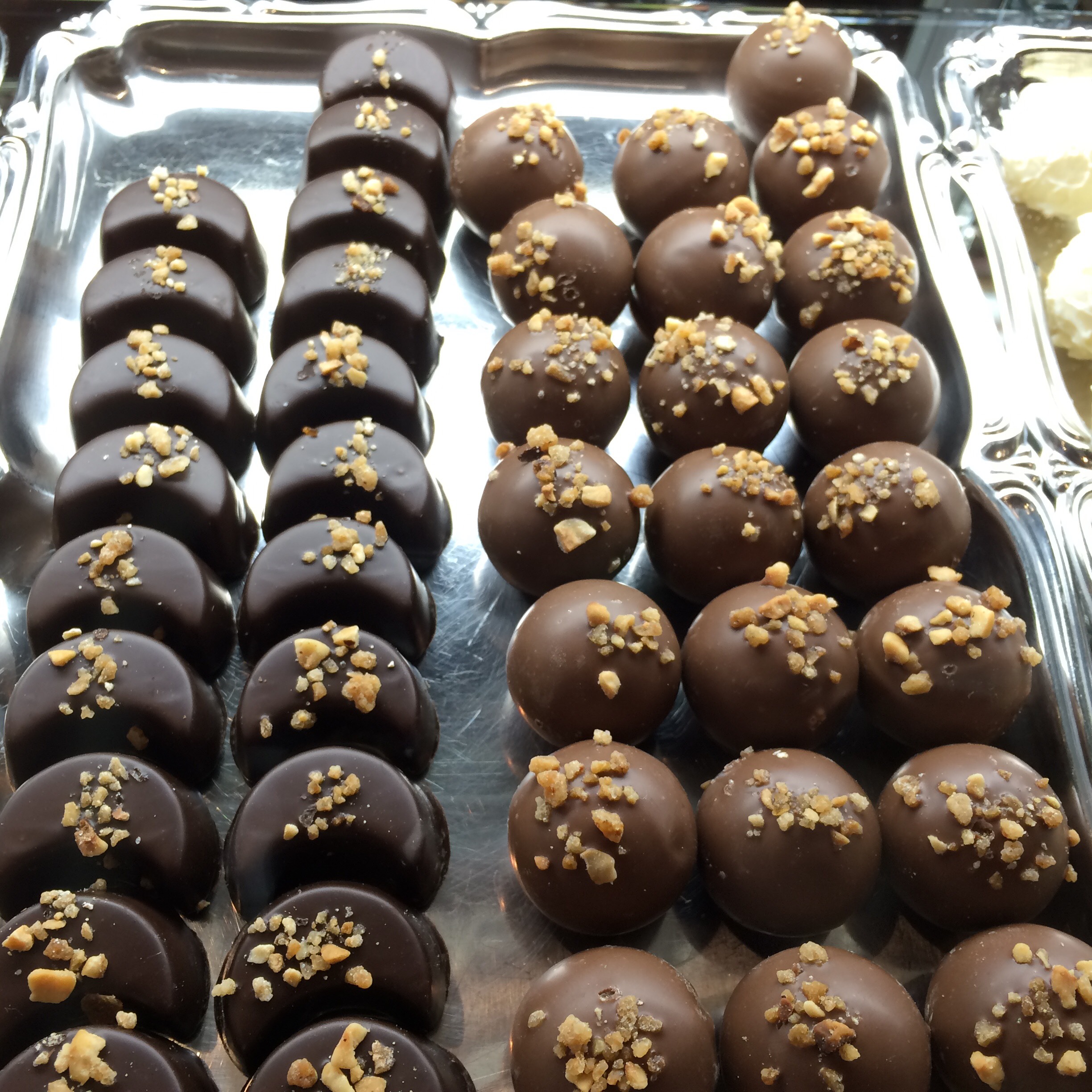 What is Swiss Chocolate?

Sweet, subtle and slightly bitter, the Swiss tradition in chocolate making of truffles and ganache includes many styles of hand rolled truffles (most often using a truffle shell), molded ganache and enrobed pralines. Switzerland by virtue of their country's location, have incorporated aspects of chocolate making from all of Europe.

The Birthplace of Milk Chocolate

In 1875, Swiss chocolatier Daniel Peter invented the original milk chocolate. Peter's legacy continues with us in our special recipes. We carry an extensive range of chocolates, including milk chocolates based on the original Milk Chocolate Recipes developed over 130 years ago.

Swiss Chocolate – A Unique Mixture of Taste and Quality

The first word that comes to our minds when we hear about Switzerland is undoubtedly 'chocolate'. Exactly! Chocolate is probably the best-known product of this small European country, which annually attracts thousands of visitors yearning to buy good quality and well-known domestic chocolate products. But, why is this chocolate among the most popular and best chocolates in the world? First of all, it melts in your mouth with a clean lingering taste  true to Swiss milk. Milk chocolate which is the best known Swiss chocolate type is characterized by a high percentage of cocoa butter. The cocoa butter is responsible for making the chocolate quick to melt at body temperature.

Alpine milk, produced by cows roaming the grassy mountain regions of the country is a key ingredient also. These cows are raised on an organic diet of grass at high altitude in the Alps, which largely contributes to the quality of their milk. The cows produce a more dense less aerated milk due to the fact they are at altitude and the milk they produce is officially known as Alpine milk.

These two main ingredients are a big part of the reason why Swiss chocolate is so famous.

The Process of Making Chocolate

Making Swiss chocolate is a piece of art since one needs to restructure the crystalline nature of the cocoa, fat, and sugar to get a smooth mixture quick to melt in your mouth with no grittiness. Santa Barbara Chocolate follows these time honored methods. Learn more about our chocolate making steps here: https://www.santabarbarachocolate.com/how-is-chocolate-made/

The first step is usually called 'refining'. Here, you mix cocoa mass, cocoa butter fat, and sugar and mill to a very small particle size so it is smooth and not gritty when eaten. After that you come to the critical step of production, namely 'conching'. It is a type of kneading of the chocolate mixture with cocoa butter at temperatures over 150 deg F. The process lasts 24 to 96 hours to really homogenize the chocolate mixture. During the conching stage residual moisture is removed, and the chocolate mixture develops the characteristic creamy nature.

The final step in the production process is 'tempering'. Learn about tempering here: https://www.santabarbarachocolate.com/easy-chocolate-tempering/

Since the liquid chocolate starts cooling and solidifying after conching, cocoa butter starts forming crystals not fully uniform in the mix. Therefore, in order to keep the chocolate looking pretty when you make it into bars or other shapes, one must temper the chocolate. Tempering is the process of re-heating and cooling under controlled conditions. The cocoa butter becomes more stable and an even-grained texture will develop. Sometimes at this stage of production in the final tempering, some manufacturers add emulsifier like soy lecithin which is derived from soybeans. Lecithin actually slows or prevents the process of blooming after the chocolate is fully tempered. Blooming is the forming of a white cocoa butter haze over chocolate.

Swiss chocolates are produced in this way, and for that reason, they have the famous taste and wonderful texture.

The most significant ingredient of our Swiss Milk Chocolate is the exotic cacao grown in South America. The cacao is hand picked from quality trees grown deep in the jungle. This rare cacao is part of the reason why this chocolate is so addictive. During the process of chocolate production, cacao is mixed with the highest-quality milk from the alpine regions of Switzerland.

Once you experience this extra special chocolate, you will be a hooked milk chocolate lover. Dream of alpine meadows where edelweiss and chamomile flowers dot the landscape. Fresh air, blue sky and puffy white clouds help paint the landscape experience in your mind's eye. Take yourself on an adventurous and tasteful journey with every bite.

We’ve all sampled some of the biggest Swiss chocolate brands. Come Christmas, New Year, and any special occasion in between, you can guarantee that the world’s most famous chocolate will find its way into someone's Christmas stocking or anniversary hamper. The only question is, why is Swiss chocolate making so widely regarded? After all, Switzerland as a country is far from the South American homeland of the humble cocoa bean.

First brought back to Europe by Spanish conquistadors in the mid 16th century, cocoa beans quickly became prized among French and Western European aristocrats, who took up drinking chocolate in order to promote better health and longevity. The only problem was that early European chocolatiers hadn’t really mastered the art of making chocolate as sweet or as palatable as we know it today.

Thankfully, chocolate making in Europe finally started to evolve in the early 19th century, thanks to the entrepreneur François-Louis Cailler opening Europes first dedicated chocolate factory in Corsier near Vevey. In fact, Cailler chocolate is still one of the world’s most famous chocolate brands. It wasn’t however, until 1867 that the then still emerging chocolate brands began to experiment with adding milk as well as refined sugar to chocolate.

The Forefathers of Milk Chocolate Making

While François-Louis Cailler might be credited as opening the first Switzerland chocolate factory, it was Daniel Peter and Rodolphe Lindt in 1867 and 1875, who finally refined the art of adding milk to chocolate, in order to add exceptional sweetness. Inspiring nothing short of a chocolate making revolution in Europe, Rodolphe Lindt then went on to invent the world’s very first melting chocolate and as many will be aware, Lindt today is still one of the world’s best-loved Swiss chocolate brands.

Of course, today we take milk chocolate for granted, however, the next time you are indulging in your favorite milk chocolate, it might be worth remembering that this wouldn't be possible at all if it weren't for just a little bit Swiss ingenuity.

Swiss chocolates are famous for their refined flavor, smooth texture and low viscosity fluidity when melted. Because of this chocolate's delicate taste, it is especially suited for preparing milk chocolate frosting, mousse and as large chunk inclusions in cookies. Professional cooking and baking results are easy when using gourmet Swiss chocolate, let the chocolate do the work.

*Nutrient content information is indicative of composition but not intended as definitive or complete. It is not intended for use in determining specific nutrient labeling values in finished products containing this ingredient as the responsibility for determining label information lies with the finished product manufacturer. Organic matter such as contained in products of this nature is subject to variation in nutritional composition. We disclaim any and all warranties, whether express or implied, including the implied warranty of merchantability. Our responsibility for claims arising from breach of warranty, negligence or any other cause shall not include consequential, special or incidental damages, even if we have been made aware of the possibility of such damages, and is limited to the purchase price of the product. None of the statements made herein shall be construed as a grant, either express or implied, of any license under any patent held by Santa Barbara Chocolate or other parties.

Alpine Swiss Milk Chocolate is made with fresh Swiss milk blended expertly with exotic cacao and this is what makes a truly exceptional milk chocolate.
×