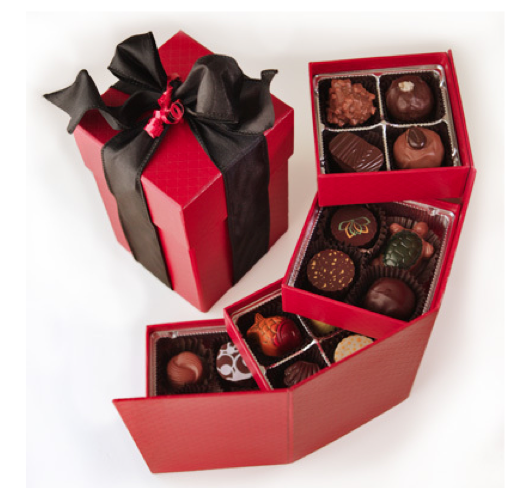 Why Chocolate Melts our Hearts on Valentine’s Day

Even without going into the history of the relation of Valentine’s Day and the chocolates, it’s easy to understand why chocolate is the favorite way to express love on the Valentine’s Day. There is an allure to chocolate that in essence is exotically romantic, it’s simply an edible declaration of love that makes the recipients of chocolate feel special and undeniably gratifying. The chocolate looks feels and tastes heavenly. This luscious substance not only melts in our mouth in a burst of flavors but also melt our hearts in bliss. This is probably the biggest reason why chocolate and red roses are the second most preferred gifts to give on Valentine’s Day.

The Beginning of giving the Chocolates on Valentine’s Day

Perhaps, it might be a marketing strategy of the genius Richard Cadbury of the 19th century that is still hugely successful even to this day and age. In the 1800s, his British family used to manufacture chocolate and was looking for a way to utilize cocoa butter that was extracted during the making of chocolate liquor. Richard Cadbury figured out a way to make to chocolate bars that were good in the taste along with being economical. Previously, chocolate was expensive to purchase and the only elite class was able to buy the chocolate from limited resources. Cadbury was able to produce chocolate that was easy on the pockets. His next step was to create beautiful boxes for chocolates with cupid and roses, which were quite popular in Victorian days and were considered as the symbol of romance. Needless to say, his chocolates became palatable and commercialized, thus sold like hot cakes. Cadbury was actually the one who first invented the heart-shaped box of chocolate and changed the Valentine’s Day forever for the generations of lovers.

In America, just at the turn of the century, Valentine’s Day was starting to gain popularity among the youth of that era. Chocolates too were making their presence felt when chocolate pioneers like Milton Hershey first started the commercial production of ‘kisses’, drop sized chocolates, in 1907. But it was Chocolatier Russell Stover who truly made the chocolate linked with romance with the introduction of the heart-shaped box of chocolates. Stover, along with her husband, first started selling chocolates wrapped in heart-shaped boxes in 1923, which quickly took off among the chocolate lovers. Their ‘Secret Lace Heart', chocolates containing in a chocolate box covered in satin and black lace, was their biggest success. Now, with over 3000 employees and $600 plus in annual sales, Russell Stover is still considered as the best chocolate box selling company in the USA.

Why just Chocolate on Valentine’s Day and no other candy?

With so many trends coming and going, there must be something about chocolate that it even today, it's a widely popular tradition in almost all English-speaking countries in the world to give your loved one a box of chocolates on the Valentine's Day. It's now a century old tradition where even the boxes of chocolate are saved as a memory keepsake. You must have heard of stories of old people, especially the war valerians, saving the love letters of their beloved ones in the boxes of chocolates in the attics or basements. Only for their off springs to find these love letters in chocolate boxes decades later.

Besides the beautiful wrappings, great taste and texture, there are actually a number of reasons why chocolate, along with red roses, are exclusively linked with Valentine’s Day.

Reason One- Chocolate is an aphrodisiac Food

Chocolate is considered aphrodisiac food since the time of Aztecs. Chocolate is said to contain substance that inflames desire and make the beloved one more open to romance. In olden days, this resulted in the tradition in European royalty to give their lovers chocolates mixed with amber to stimulate their love. According to science, there might be some truth in old legends. As per the recent studies, women who eat chocolate are said to show more desire for romance as compared to women who don’t eat chocolates. This might be because chocolates release brain soothing chemicals which increase energy and desire levels. Chocolate is proven to produce natural high which elevates mood and often equated to feeling in love.

Reason Two- Chocolate is a ‘food for Gods’

Chocolate comes from cocoa tree which is also known as ‘Theobroma cacao’ which is a Greek way of saying ‘food for the Gods’. While we might agree on this term just on the basis of taste, in ancient Maya civilization for which the cacao God was sacred, the term had more of a spiritual and literal meaning. The Aztecs used to exchange cacao beans as currency and as food and drink for the privileged among them. So if chocolate is the food fit for the Gods then it might be good enough for your significant other- or even you.

It’s fact that the chocolates have a huge physiological and emotional effect on people. Giving chocolate is not just a sign of love but also given as ways to express delight, initiate desire, expresses your apologies and rekindle friendship, or even given just to simply uplift the mood as it’s a powerful mood enhancer.

Reason Four- Chocolate, especially the dark one, is good for health

The darker the chocolate is, the better it is for the health of yours. Dark chocolate contains chemicals that lower the risk of cancer and heart diseases. Dark chocolate is full of antioxidants and flavonoids which fight against the free radicals in the body. Not just that but it also is known to lower the blood pressure and improve the blood flow. Besides health perspective, it is even great for skin as dark chocolate contains bioactive compounds that increase the skin density and hydration. And there is a considerable evidence to say that the dark chocolate improves brain functions as cocoa contains stimulant substance like caffeine and theobromine in small amount. In all, dark chocolate is an all-rounder which is not only great way to express love but also good for the heart (literally!) and provides glow and youth to your face along with boosting your mind capabilities. However, to take full advantage of health benefits of dark chocolate on the day of love, it’s important to choose organic dark chocolate with high cocoa content like the premium ones from Santa Barbara Chocolate shop.

It’s not just the taste, although that’s a huge factor, but the chocolate is certainly well liked among the masses. Eating chocolate makes you feel as if you have been provided with a break from the daily mundane life. Since chocolates cannot be eaten daily, as excess of anything, no matter how many health benefits it has, is certainly not good for you. It’s is recommended to eat chocolates in moderate amount and indulge occasionally. And can be a better occasion than the Valentine’s Day.

In all, the day of love is synonymous with smooth silky richness of chocolate. Hence, eating chocolates might the perfect way to celebrate your love with the rich indulgent goodness. So go ahead and check out chocolate stores as they offer array of scrumptious chocolates that can easily delight your sweetheart on this Valentine's Day. 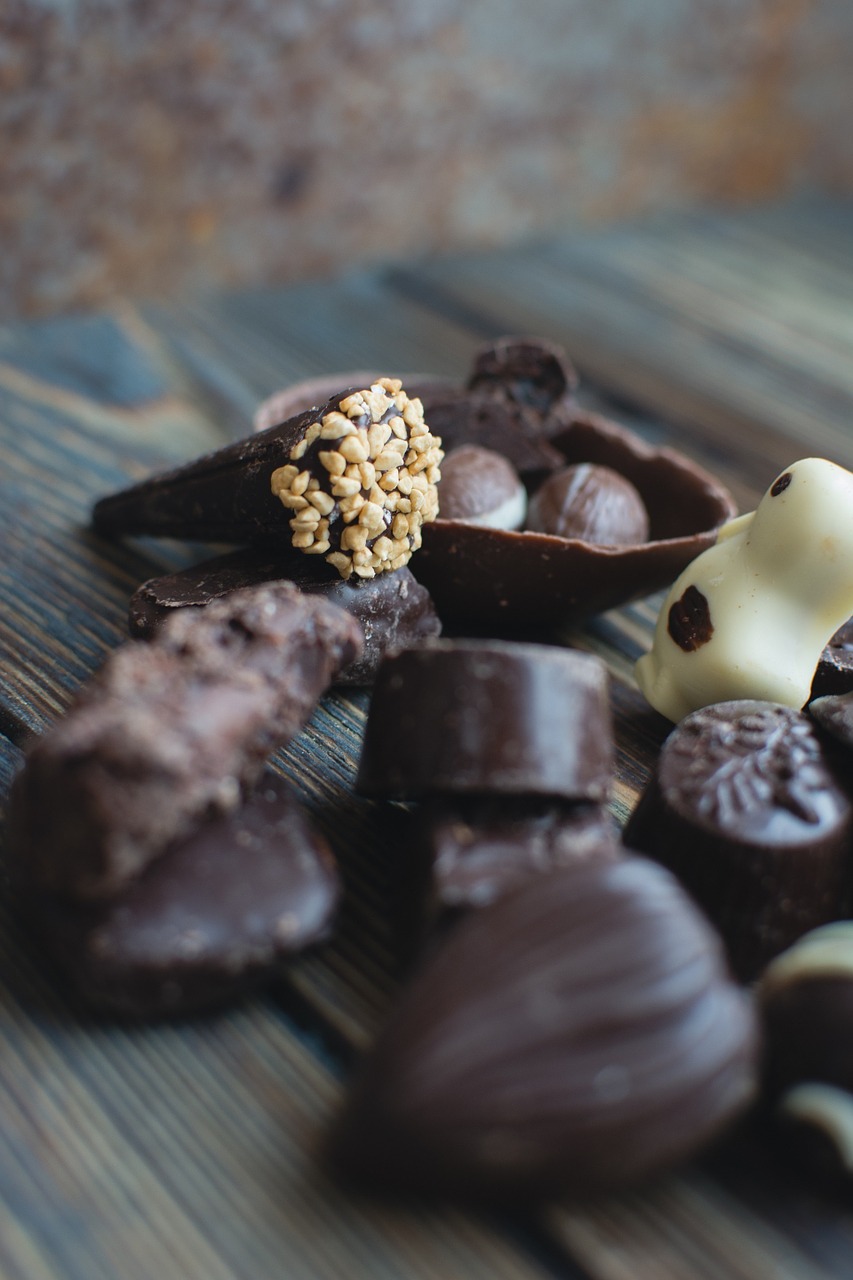 References and Sources for the article: