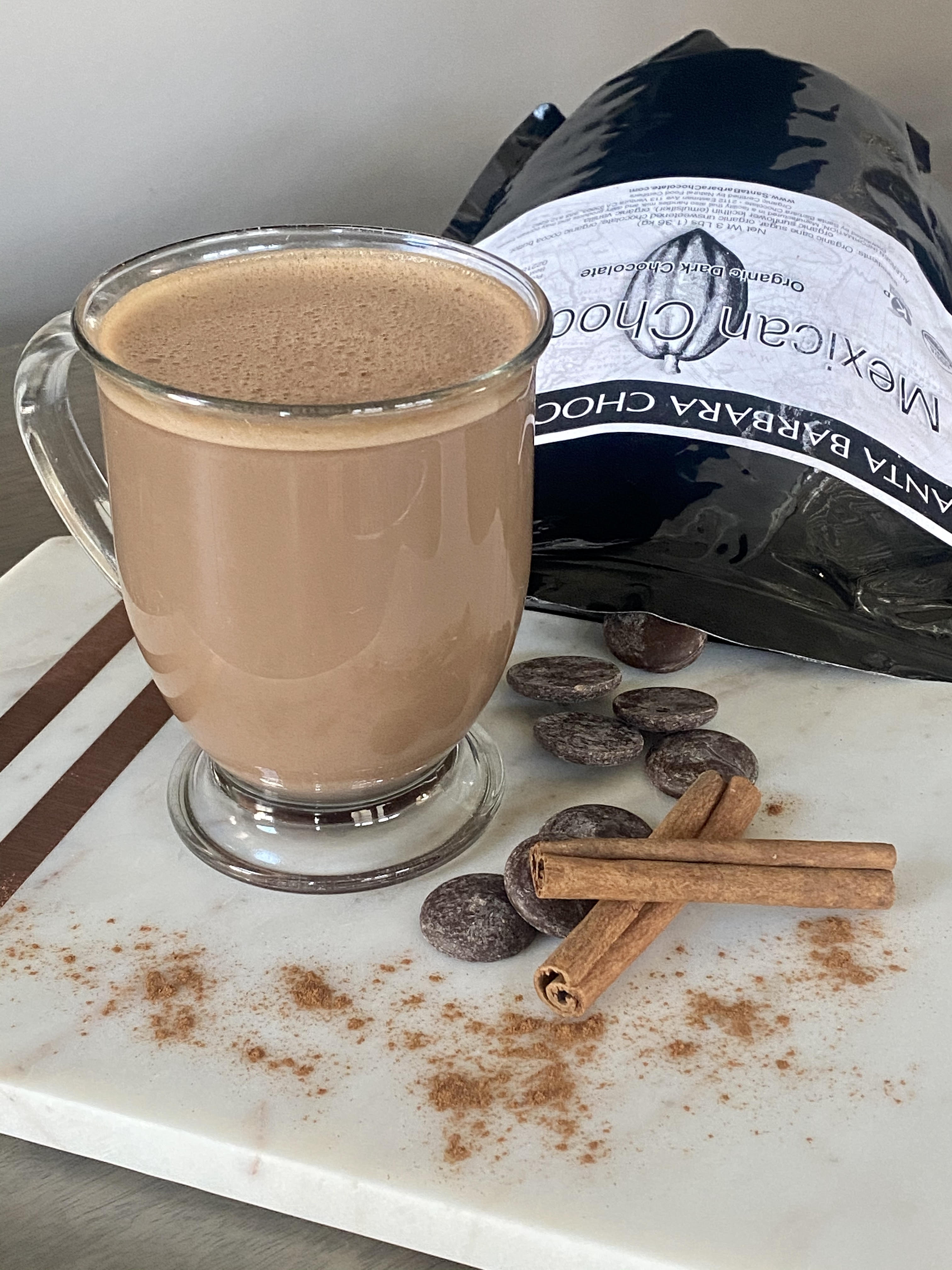 Considering the times we are currently in, who doesn’t need a little spice in their life? What better way to do that than trying something new?! Here in NY, summer is not over yet; however, with all things pumpkin spice coming to the markets by the end of August it sure feels like it. But why stick with the mundane lifestyle so many ‘fall’ into and try something different.

As we gear up for those crisp autumn evenings, why settle for the classic warm beverages, switch it up with a Mexican hot chocolate. Who ever said it had to be cold weather to have hot chocolate anyway? Did you know that when chocolate was discovered it was initially only consumed as a COLD beverage? Yup! The history of hot chocolate actually began its life as a cold and spicy beverage that has evolved over the years to the one we now know, warm and sweet! Quite the opposite, right?

A little history lesson will explain the evolution of the deliciously sweet and satisfying hot chocolate drink. The Aztecs and the Mayans were native to the regions of Mexico and Central America. They were the first people to make and discover chocolate before it was found by the old world.They started drinking chocolate made from the ground-up cocoa seeds with water, cornmeal and chili peppers; a much different version than we are accustomed to today. They mixed the ingredients together in a pot and would pour it back and forth from the pot into a cup until thick foam developed. Then they would have finally have the beverage when it was cold.

Fast forward to the early 1500s when Cortez, an explorer, brought cocoa beans and the tools used to make the chocolate drink to Europe.Even though the drink was cold and bitter that did not stop it from becoming a popular drink that was loved by the court of King Charles V and the Spanish upper class.Once the drink was introduced to the Spanish is when it evolved from cold and bitter to hot and sweet. Their hot and sweet drink was kept under wraps for over a hundred years before the rest of Europe got wind of it. Chocolate shops in London grew in popularity. In the late 1700s, Hans Sloane, the president of the Royal College of Physicians, brought a recipe which originated from Jamaica that mixed chocolate with milk, making it more palatable.So the English began adding milk to the beverage and consuming it as an after-dinner drink.

Hot chocolate was often used as an aphrodisiac, a stimulant, medicine and a special drink up until the nineteenth-century which is very much so in contrast to how we consume it today. Nowadays, the hot chocolate drink we know and love is a warm and comforting beverage to sip, savor, and simply enjoy.Here in America hot chocolate, also called hot cocoa, is often made with powder packets that are simply a “just add water” concoction; however, you can easily find more gourmet versions at local coffee shops or restaurants.For myself and my family, I prefer to use fresh, and more importantly, quality ingredients over my stovetop.

America is not the only country that has hot chocolate varieties. Italy, Spain, Belgium, India, Columbia, and Hungary, to name a few, all have their own version of hot chocolate. But let’s not forget the country where it all started with the Aztecs and Maya people, Mexico! The word chocolate originates from the work xocolatl, which means bitter water in the ancient Aztec language, Náhuatl. Xocholat’j is a word from the language which means to drink chocolate together.Consuming chocolate as beverage has been around for well over 4,000 years, as opposed to eating it, which has only been for the last 200 years! So what makes Mexican hot chocolate different from anywhere else? Original recipes from thousands of years are were made with ground cacao, water, and corn! The more popular versions circulating now are made with cacao, sugar, and Ceylon cinnamon with water.The chocolate is unrefined and traditionally processed by hand giving it a gritty texture. Believe it or not, in Mexico and all Central America it’s common to have this everyday for breakfast! Please don’t tell my kids, they will want to pack a bag and leave! It’s also made around religious holidays like Christmas, Three Kings Day, and the Day of the Dead.

Consumers can find many brands of Mexican hot chocolate on the market but there are two that seem to dominate and are fairly easy to get your hands on here in the states. The first one, Ibarra, is a Mexican brand of chocolate, and the other, Abuelita, which is made by a brand more familiar to us here in the US, Nestle.Mexican chocolate is sold in tablets or discs that are essentially cacao, sugar and cinnamon and/or various spices. The texture is rather grainy and its loaded with sugar crystals. These tablets are used to make Mexican hot chocolate. Making it is simple. First you take one tablet and mix it with 4 cups of milk over medium-high heat.Stirring it continuously until the tablet dissolves with a molinillo whisk, which is a traditional tool used to prepare Mexican hot chocolate. A molinillo whisk is hand carved from wood and is rolled back and forth between your palms to aerate the milk for a frothy, creamy drink texture. If you do not own one, a regular whisk can work just fine and placing your drink for a few seconds into a blender will help add some extra froth.

How does the Mexican hot chocolate differ in taste from the traditional one in America? The first thing you will notice that is different is the cinnamon flavor that lingers on your tongue after you sip. To most, the chocolate taste will be sweet and pleasant. Both contain more sugar than chocolate!The hot chocolate produced from the Ibarra brand is made from sugar, cacao paste, soy lecithin (an emulsifier and flavor protectant), and cinnamon.Cacao paste is an unsweetened chocolate made from raw cocoa beans, essentially a pure form of chocolate which is similar to what is used in a traditional Mexican hot chocolate. In contrast to Abuelita, which was actually launched in Mexico City in 1939, seven years earlier than Ibarra, gets its flavor from sugar, chocolate, soy lecithin, vegetable oil, artificial flavor, PGPR (an emulsifier), and cocoa processed with alkali. Notice how it doesn’t even include any real cinnamon which is one of the key flavors that makes it different. In my opinion, Ibarra has a much more satisfying, natural chocolate taste with a nice balance of sweetness and cinnamon. Abuelita, tasted overwhelmingly like artificial cinnamon flavor and super sweet chocolate. The super sweet chocolate part was tolerable but the cinnamon flavor was overbearing.While these are the norm here, if you travel to Mexico the flavor profile of hot chocolate is less sweet with various combos of cinnamon, vanilla, chilis and other spices depending on the region throughout the country.

Of course there are other brands you could find on the market and try that will satisfy your sweet tooth but there’s nothing like homemade! You can search the internet and so many recipes involve using one of the two tablets discussed. How about a recipe from scratch? I have one for you that is delicious and involves Santa Barbara Chocolate’s new Mexican Chocolate.These discs, pictured to the right, are organic sweet chips crafted specifically for hot chocolate drinks and specialty baking. They have a mild cacao flavor with red fruit and vanilla notes making it ideal for a Mexican hot chocolate recipe. This chocolate contains a little sugar, unsweetened chocolate, and vanilla, so it’s not necessary to add much more than milk! Without further ado here’s a recipe I adapted for my family that we all scoffed up!

In a small saucepan heat all the ingredients , except cinnamon, over medium heat and stir continuously until all of the chocolate is fully melted. Once the chocolate is melted, continue to heat until desired temperature but do not boil. Add in cinnamon and stir for a minute or so until blended.You are ready to serve; or for a more traditional texture add to a blender, I love using my Vitamix Aer Container which aerates and froths, or a regular container works just fine too. I like to warm up my mugs for 20-30 seconds in a microwave in order to maintain my hot chocolates’ temperature as its consumed. Drink as is or add your favorite toppings, like marshmallows, whipped cream, or crushed cinnamon sticks to name a few!

While this recipe is delicious, for those who like a little more spice in their life try using the above recipe, preparing it the same way and adding a pinch of cayenne or ancho chili powder simultaneously with your cinnamon for a little added bonus kick! We all know we are all going through stressful times right now and many people are home enjoying a cocktail or two. Why not turn your cozy cup of hot cocoa into an adult style nightcap? A spiked Mexican hot chocolate. Yup! All you need to do is prepare the hot chocolate above, shut off your heat, stir in 2-3 ounces of tequila, pour, top, and let your palate enjoy!

Let’s not stop yet, another twist to the drink, especially in warmer months, is a Frozen Mexican Hot Chocolate. Essentially, you are preparing the same way, kinda. My way is a little more time consuming as I like to freeze up cubes of milk in order to not water down the flavor during preparation. Typically freezing the night before is ideal or you can skip this part and just use regular ice cubes.If you prepare the frozen milk cubes ahead of time the ingredients are the same and made the same way except use 1.5 cups of milk. Once the chocolate is melted completely do not wait for the mixture to get too hot before you add in your cinnamon and any additional spice. Stir for 15 seconds and remove from the heat. Pour the mixture into a high speed blender, add 1 c of frozen milk cubes and an additional 2-3 cups of ice (depending on how thick of a texture you like) and blend until it becomes a thick consistency.Top with whipped cream and drink up!

Next time you’re looking to spice things up, try a Mexican hot chocolate.It doesn’t matter which way you decide to try this delicious drink, try one way, try them all. Vary the amount and type of spices you add to your palates desire.You will not regret it! At a time when most are not thinking of traveling, make yourself a Mexican hot chocolate, close your eyes, imagine you are on a Mexican getaway, and enjoy a little added spice in your life!

Below is the molinillo whisk used in traditional Mexican chocolate making. 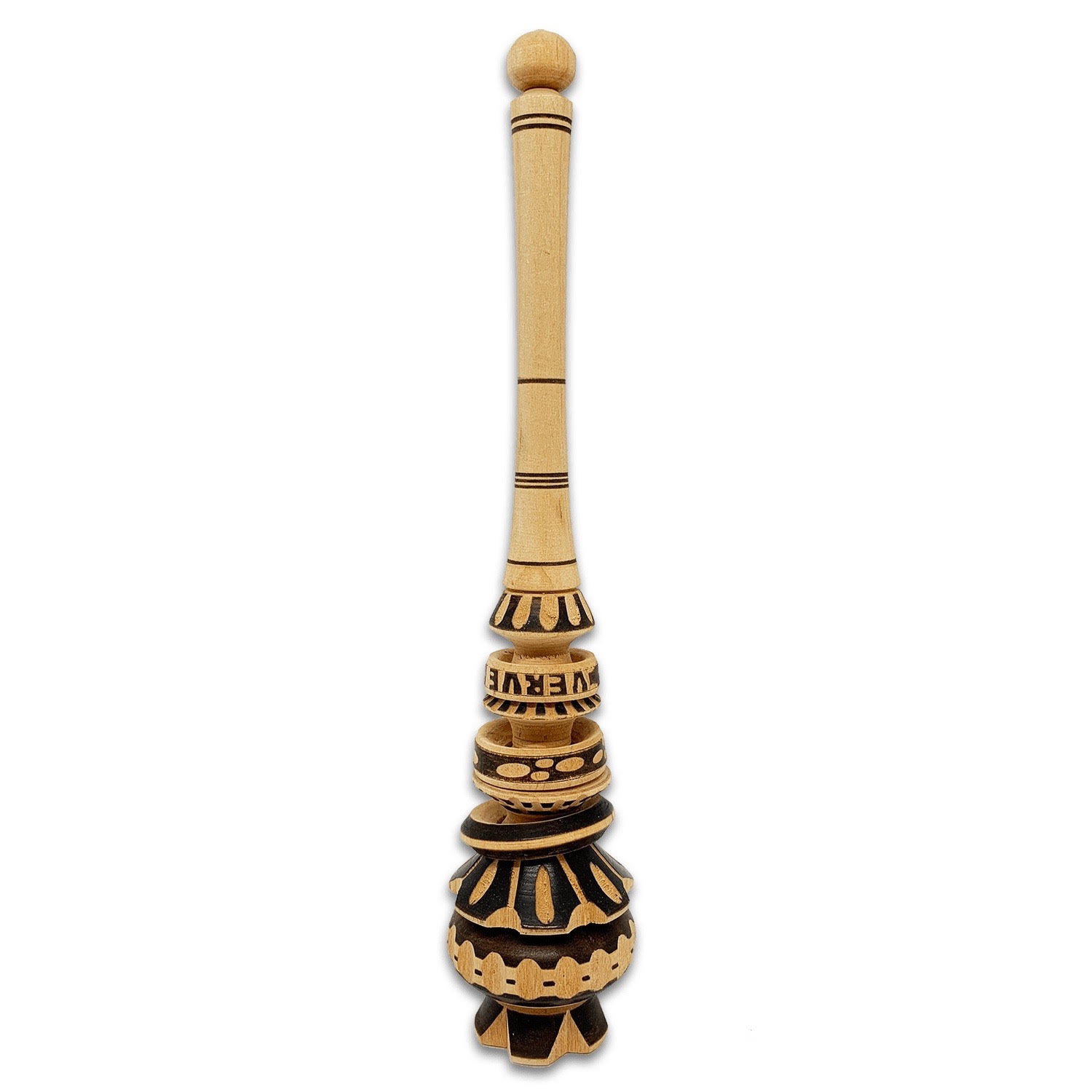